As I travelled North from Ksamil, heading for the ancient city of Berat, this coastal edge of Albania felt like another planet. The seaside resort of Sarande is hugely popular, but like many others around the world. As the mountains sweep down to the sea, the slim areas of land surrounding the stretches of sandy beaches are encrusted with high rise apartment blocks and 5-star hotels.

The small bays I had left behind in Ksamil gave way to long strands of sun-loungers. Natural reed topped beach parasols changed to multi-coloured, synthetic umbrellas. The tiny, one-man stores had been replaced by brassy boutiques, shopping centres and outlets full of brightly coloured, no doubt imported, inflatable dolphins and flip-flop sandals. Fast food outlets, chain stores, bars and clubs lined the route. Much of this Ionian coast appeared to be a building site and construction lorries filled the roads.

The cars on these roads were a costlier breed – shiny new BMWs, large sports cars and even a huge Humvee. Out on the water, ferries transported visitors from nearby Corfu and Greece. Modern, air-conditioned coaches squeezed through the narrow, winding streets. Taxi fumes filled the dusty air. It was with relief that I reached the mountain road and headed for the hills once more.

However, before I climbed the Llogaro Pass there was an enticing little bay with a castle to visit; yet another with a link to the ruler Ali Pasha I was now getting to know so well! Porto Palermo Bay lies in a government-designated, Protected Landscape. Above this bay, the small, triangular castle, thought to be Venetian, is well maintained. A cheery guide told us some of its history in broken English.

The nation-wide tales of Ali-Pasha and affection for his English visitor Lord Byron are found all around Albania. Even a crowd of Albanian teenagers who swarmed through the castle posing for photographs could be heard chattering loudly and mentioning his name. The fort also served as a former Soviet submarine base during the communist regime in Albania. Like something reminiscent of a Bond movie, its semi-abandoned tunnel and barrack attracted my attention as I returned to the road. 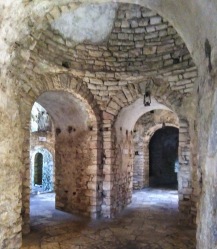 This onward route led upwards to the Llogaro National Park in the Ceraunian Mountains. Sweeping ever upwards, the road climbs round breath-taking scenery with stomach-clenching drops below. The Llogaro Pass is equal to many sought by daring drivers across Europe, in its steep ascent and hairpin bends.

I paused at the top, the highest point between Sarande and Vlore, for refreshment and to take photographs. A tiny stall sold local honey, mountain herbs and, somewhat bizarrely, large chunks of the mountain rock. Bright yellow chutes of para-gliders sailed through the air down to the beach below.

This stretch of coastline is almost cut off from the rest of the country by the mountain range and has the sunniest climate in Albania. In 2012 Frommer’s guide dubbed it the best value destination, thus further fuelling its tourism trade. This Mediterranean climate and sunny lifestyle are obviously very popular with Albanians as well as foreigners.

After the sparseness of populations passed elsewhere, I was staggered by the sheer volume of holiday apartments along the shoreline. Thankfully small villages and secluded bays can still be found for those preferring something a little more peaceful. Fresh air, hiking and wildlife watching are also available close by in the mountain parks. 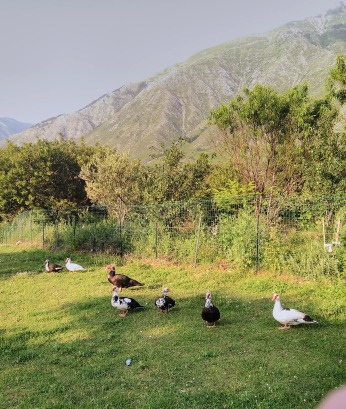 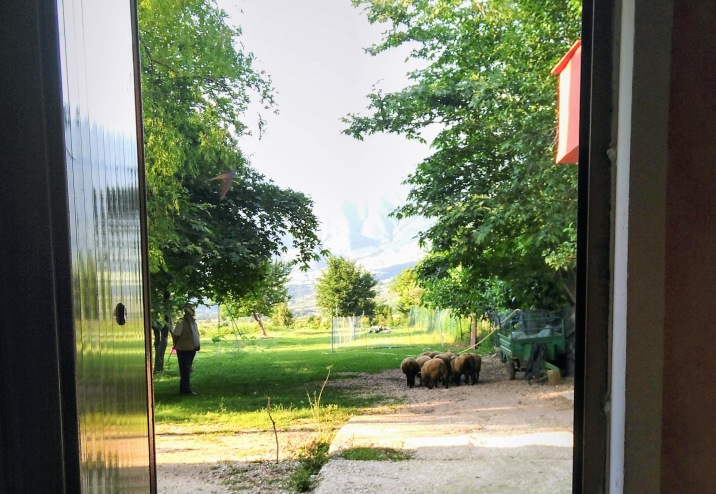 My resting place for the night was just over the crest of the hill, near Dukat, and still within the gloriously forested National Park. The young guesthouse owner and his family were very welcoming and allowed me to wander around their kitchen garden, which was home to a collection of ducks, hens, peacocks and guineafowl. The father’s tiny flock of sheep also wandered through the garden and he was later seen wandering up the road with a cow on a long rope.

Once again the Albanian hospitality was second to none. I ate well of local dishes and home produce before the inevitable Raki was produced. My host, having worked in Italy for some years, presented me with a velvety red rose, freshly cut from the garden, and through the wonders of translation apps on phones, we enjoyed as good a conversation as you could wish for.

The next morning, the car was pointed northwards once more up the coast. Then swinging inland from the large, harbour city of Vlore I travelled through the more industrial town of Fier. This cross-country route had possibly the longest stretch of rough surfaces found so far. Large parts of the road had subsided as much as two feet and had bizarre patches of fresh tarmac at either end of the dip, like sticking plasters holding a wound together.

Somewhere along a country stretch of this highway, I chanced upon what appeared to be a stranded cruise ship. This strange building, for it was a house, is for sale, if any of you fancy a “boat house”?

My destination was now the Unesco protected site of Berat in Central Albania. Known as the “Town of a Thousand Windows”, this museum city oozes history. The Ottoman houses of the old town are perched, tightly-packed on the steep hill, below a 6th century BC fortress and above the wide Ossum river. 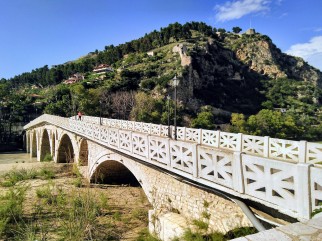 Climbing the cobbled hill to explore its alleyways, I stopped to admire some needlecraft pegged on a line outside a minuscule, traditional dwelling. At once a young man beckoned from the door to choose from various pots of preserves for sale. As I enquired if he had local honey, which I had acquired a taste for, he was joined by the matriarch of the house. This woman could sell snow to the Eskimos! 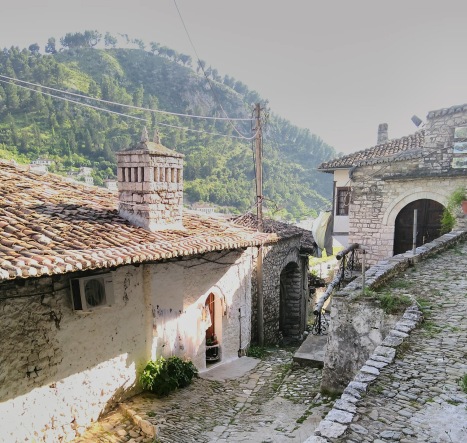 Despite the language barrier, with a mix of gestures and sounds, she secured her sale and I escaped with several pots of jam and a beautifully embroidered cloth, my purse thousands of Lekes lighter. Thankfully the favourable exchange rate meant I had still found a bargain. These items will now be enjoyed long after my trip and hopefully, my small purchases will benefit the local economy!

Finally, I found my way up an ever-steepening slope to the smallest restaurant I have ever been in. A young Berat man and his family have opened their backyard as a tiny, homemade bistro. The lean-to shelter and furniture are hammered together from very old, reclaimed wood but the welcome, service, and the traditional menu is second to none. Attempts to speak Albanian, which had caused amusement and surprise throughout the trip, caused an even more delighted response here. When it got to “Raki time” at the end of the meal, he filled the glass time after time with his father’s homemade tipple.

Two German couples made their escape, much the worse for wear, before me. Two more, who had sat down to eat after me, looked on in apprehension. The farewell he gave as I left was like that of a very dear friend. His wife came out of the kitchen to say goodbye as well. What a wonderful way to remember Berat, but also the country as a whole. My final road next day would take me north to the mountain city of Kruja. Could this country get any better?