Following a simple, continental breakfast the next morning, we set off for the return journey eastward, bound this time for Segovia. This is yet another historic city boasting cathedral and castle. The Alcazar castle resembles the style of those most often seen along the German Rhine Valley and claims to have inspired Walt Disney with its pointy turrets. However, the most jaw-dropping spectacle in Segovia must surely be the giant Roman aqueduct.

This awe-inspiring structure towers over nearby apartment buildings and reaches from Alcazar, at the top of the old town, right through the lower square and up the opposite slope. Originally it extended up to the water source in distant hills, bringing water straight from mountain spring source to many of the wealthier abodes en route to the castle.  As one who knows how hard it can be to get the gradient right in modern domestic plumbing, I was seriously impressed. One cannot help but be rendered speechless by this incredible feat of construction, carried out by legions of soldiers and stone masons so long before modern mechanisation.

Sadly, many of the tourists in the area seemed more concerned with taking selfies than contemplating this megalith. No matter where you encounter fellow tourists these days there seems to be more of a preoccupation with getting their own image rather than taking in the glory of their subject.

We sat in the square in the warm autumn sunshine, watching women traders hawking lace shawls and pashminas, local workers and residents, tour guides and their entourages and wondered what the Roman construction workers would think of the scene. If only these massive granite stones could tell us their tale and the human counterpart. 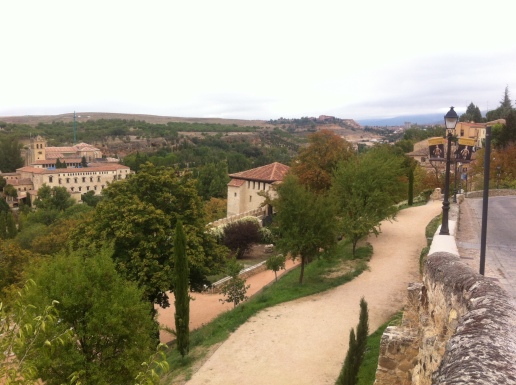 View from the city walls

A huge sundial on a building wall

And there, my own traveller’s tale must end for now. This small glimpse of Spain, and even smaller one of Portugal, has merely wetted my appetite and I hope it will not be long before I return to explore some more. This is a land of vast expansive plains, storks nests and almond trees, big blue skies and a sat nav pronunciation that made us giggle. There is so much more to be discovered, way more than sunbeds and villas, ex-pat communities and cheap booze. This country may be enduring hard times, but it still has a dignity and a wealth that goes beyond the euro.

One thought on “Day 4: in Roman footsteps”