When you are so close to the border of another country, it would be a shame not to visit that one too. So, our third day of Spanish travel saw us headed west to Portugal. Driving on the Spanish roads is a pleasure, compared to the mania of Southern-English traffic, so one can relax and admire the breadth of natural panorama that stretches out before you as the miles fly by.

On prior consultation of our good old paper map, we had spotted a Spanish landmark of interest called Ciudad Rodrigo, which fell conveniently at a halfway mark in the day’s journey. Although this initially appeared to be yet another cathedral city, it is also a border fortress which was the scene of Viscount Wellington’s Anglo-Portuguese army besieging the French Garrison in control in 1812. This strategic victory was to become the beginning of the fall of French-dominated Spain from British-dominated Portugal.

cannons which would have been fired at the British 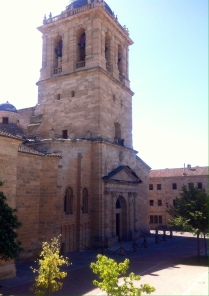 Scene of the siege of Cuidad Rodrigo

As the sun shone down on this sleepy little place, we strolled the city walls gazing out across the surrounding plains with only a few old cannons and occassional interpretative plaques to prompt our imagination of the horrors of those times. This was made more vivid by our being fans of the television drama series Sharpe, which brought the stories of those times to life. Watching dog-walkers and families with young children enjoying the sunshine, it was hard to imagine the bloodshed and destruction these walls had witnessed.

In contrast to those military days, we crossed the border to Portugal without attracting more than a glance from the guards standing chatting at the crossing point. Almost immediately, as we headed across the mountain range to the warmer western slopes we noticed a change in more than the landscape. Although still remote and rural, the agriculture appeared richer, the houses less shabby despite their being similar in size – and the considerably higher price of fuel at the filling stations indicated that perhaps this is a country with less of an economic problem than its neighbour.

Soon we were turning off the main highway once more but the narrowing road ahead showed no promise of hostelries for our night’s stay. As we climbed and climbed, passing small stone dwellings of traditional vernacular style I caught glimpses of a village which seemed to have grown out of the rocky mountainside. This was the windy road to Linhares da Beira, a place so tiny it didn’t appear on our map!

Anyone seeking a retreat within which to restore health and vitality, enjoy the natural environment and restore their mental wellbeing should surely seek out this little gem of a place. For the historians it offers several heritage buildings, including a fortress, chapel and cobbled roman road ( boy those Romans got everywhere!). Our bed for the night was in the Corte Real stately home, a baroque mansion which had been reduced to rubble by a cyclone in 1941. 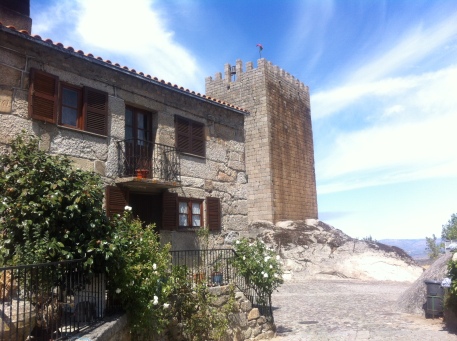 Fortunately for us, the local town council had restored it sensitively in 2002, turning it into a National Inn. The new accommodation nestles curiously within the old ruined walls, which may be viewed from various windows along the corridors. The vista across the surrounding mountains is breathtaking and the walled garden and swimming pool area offer the perfect place to read a book, write, paint or simply unwind. Exploration of this delightful area might take a couple of hours or a couple of weeks, depending on your needs, but it is surely a hidden treasure.

This simple hotel does not have its own restaurant, which would at first appear to be its one failing. However, a short walk up the cobbled street leads to the discovery of an amazing restaurant, La Cova da Loba. The fact that this bijou hostelry is booked up days ahead, despite its seemingly isolated situation, attests to its excellent menu, warm welcome and top class, but friendly service.

By now we had accumulated enough essential Spanish phrases to ingratiate us with the staff of cafes, shops and hostelries. It is such a pleasure to see the warming of their attitude when you apologise for your ineptitude in their language but have a go anyway. However, the border crossing rendered these new words useless and we found ourselves back at base with no previous knowledge of Portuguese.

Thankfully, we found the young waitress to be happy to teach us some basics and as a result of our efforts and her recommendations we were treated to a feast fit for a king. It’s not every day you find wild boar of local provenance on a menu and we positively pigged out ( pardon the pun) in royal style on several local delicacies cooked to perfection. Thankfully the road to our room was downhill as we waddled back under the star-filled skies with bellies fit to burst, vowing to return for a longer stay in the not too distant future. 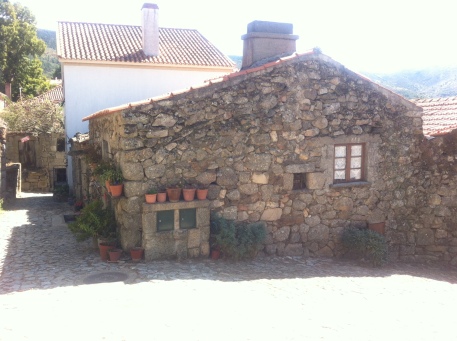