The onset of affordable travel, with package holidays to Spain in the ’70s, passed me by in a childhood of Southern Irish self-catering. Since then, the opportunity to visit Balearic lands had not come my way, so as I landed in Madrid airport for a short but very welcome break, my expectation was coloured by decades of second-hand reports of sangria and straw donkeys.

Not for us the Costas and ex-pat haunts, however. As the hire cars ahead of us headed out of the airport and headed towards city or sun, we turned northwards for mountains and what I hoped would be a taste of “Real Spain”. The medieval cathedral city of Burgos lay just a couple of hours drive ahead of us.

First impressions were of an excellent infrastructure, empty roads the envy of any used to the M25 horror stories, with such drivers as we shared them with driving impeccably and without rage or competitive attitude. The rugged, volcanic landscape spoke of hard-earned livelihoods with scrubby growth providing a meagre diet for the sturdy, longhorn cattle straggling across the land or gathered in clusters under such shade as they could find. Large black silhouettes of these “torros”, and elsewhere smaller and more colourful representations, along the roadside reminded us we were in a land who used these creatures for national sport.

As we sped up the smooth highways, this dusty, drought-toughened land was punctuated with ancient hilltop settlements, all gathered round a striking place of worship, often beside a strategically-placed historic fortification. One can easily imagine the history these lands have born witness to, the bloodshed and tragedy played out around each tribal territory.

The provincial capital city of Burgos was declared a World Heritage Site by UNESCO in 1984. Apart from being the site of a spectacular French Gothic Cathedral, one of a seemingly endless number in these religious parts, its famous sons include El Cid, Castilian nobleman, military leader and diplomat born a couple of kilometres north of Burgos, raised and educated here and laid to rest in a tomb in the cathedral. The city walls spoke of great historic wealth but the more recent economic climate has been less kind.

The city is en route for the many pilgrims trekking the renowned Camino de Santiago, who swarm in the cathedral square at each end of the day. This clan are easily recognisable by their weatherproof outdoor attire, sturdy walking poles and hearty camaraderie. Anyone who enjoys the harmless sport of people-watching may enjoy this parade whilst sitting outside the cafes which line the square. Vendors of the surrounding streets offer everything from regional souvenirs to local delicacies, as one explores the old town network of medieval architecture. 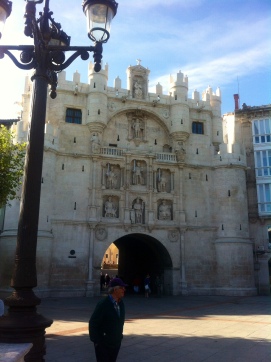 Seeking out menus which include traditional dishes is always worth the effort as they are wholesome and flavoursome. Morcilla, a sausage similar to British black pudding, is often served in a soul-food stew with red beans and well worth a try. Grandfathers Pudding, a soft cheese with honey and walnuts is an unusual but delicious dessert. Every town or village sells local produce, with fresh fruit in abundance and artisan bread a staple diet.

It is the success and dependency on this very food production that takes its toll on the Spanish environment, the result of which we were to see for ourselves on day two of our travels. However, this was far from our minds as we enjoyed testing our limited repertoire of the Spanish language and relaxed in the company of our attentive hosts.